Posted at 11:00h in Black and White, Blog, Photography by Tim & Ally Wilson 0 Comments
1 Like

Before we consider the best film cameras for beginners we need to ask a question. Why would you wish to shoot with a film camera when digital is so relatively cheap and immediate, and the quality is second to none?  Well there are so many reasons. Maybe you are of the generation that grew up with digital and want to experiment with analogue. Possibly you’re a wannabee Hipster and are tired with the immediacy of digital. Maybe you’re as old as dirt and remember fondly the days of taking your colour film to the local chemist for developing and printing (D&P as it was known as).

Whatever your reason, you need to get the right film camera for you. 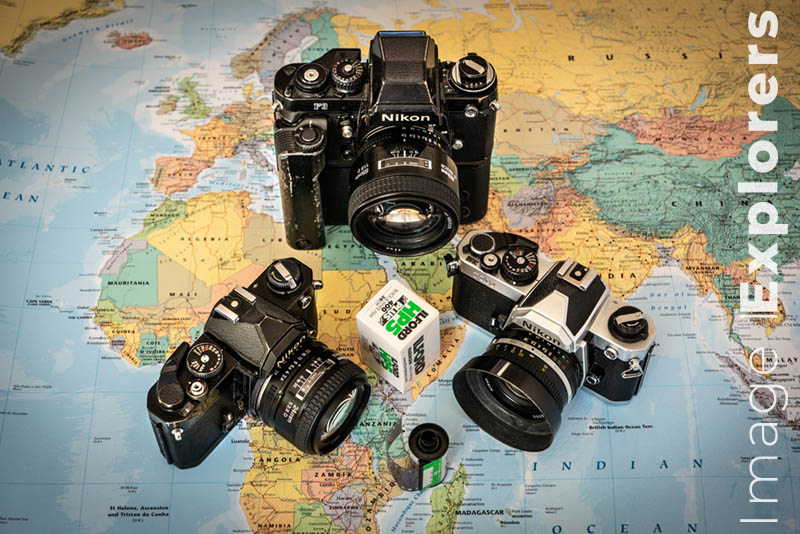 Our 3 Nikons – what could be your best film camera for beginners?

The first thing to look at when deciding on a film camera is the camera’s ability to do manual. Although one might think that the best film cameras for beginners would have an auto function to help you, you will not learn nearly as much about the finer points of exposure if the camera does it all for you. Not only that, but the light meters on older film cameras were not nearly as sophisticated as today’s digital cameras. They could get fooled by tricky situations very easily.  What do I mean by a manual camera? The camera must allow you to choose your own aperture and shutter speed.

What brand to buy

There are so many second-hand cameras on the market with varying prices, but the best thing to do is to stick to well-known brands and models that people and blogs recommend. The following list that I titled “best film cameras for beginners” is not definitive. These are just the main ones I recommend at varying price points.

What to look for in second hand cameras

Firstly I would recommend you buy from a local camera store. Not only will you get a small guarantee on the camera but the staff should be able to demonstrate its features. If you get an assistant who is a little over 35, you may even see a bit of a nostalgic glint in their eye. They may also be humming, “Those were the days my friend, we thought they’d never end …”! Bit more expensive than eBay but it takes the worry out the purchase.

Obviously eBay is the cheapest way to get a good deal. When the camera arrives, check all the controls work smoothly and look at the battery compartment for any past battery leakage. Remove the lens from the camera and make sure the aperture works smoothly and snappily. Look through the lens and check for any fungus growing on the elements. Finally check the front and rear elements for scratches or wear on the lens coating. Many people will tell you beforehand that there is a slight scratch on the lens “but it doesn’t affect the quality”. This may be so for most photography but if you are photographing into the sun (contre-jour) you will, at the worst get flares in the image and at the very least have reduced contrast. Stay away from these lenses if at all possible.

What lens to start with

A best film camera for beginner guide wouldn’t be complete without some lens guidance, so here it is. Most camera bodies will come with a ‘standard’ lens. This is a 50mm non-zoom lens (non-zoom lenses are called prime lenses) that is very close to the view of the human eye. They are usually very good quality with a wide aperture and an excellent lens to get started with before you start investing in wide angle, telephoto and zoom lenses. Start with the 50mm. 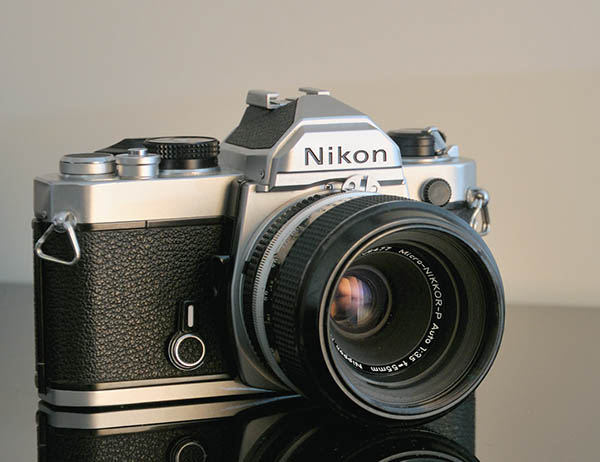 The Nikon FM came out in 1977 and was manufactured for 5 years before being superseded by the FM2. This camera is totally manual (not a single automated setting to be seen) and is also mechanical. This means the tiny battery in the camera only operates the very basic light meter. If your battery fails then everything else will keep on running. This was invaluable to a pro and the FM and FM2 were workhorses that kept on running. My own personal FM (I got it at college in 1982) has seen thousands of rolls of film through it and been subjected to all sorts of camera un-friendly environments and it has kept on going.

During a photographic job where I was photographing an aluminium smelting plant, there was an extremely large generator with powerful magnets. I couldn’t use my Nikon F3 hp, which was my main working camera, in the same room because of its shutter being affected by the magnetic field. The FM continued to work without missing a beat. I do have to admit having the shutter replaced a few years later but that was because the attached motor drive had worn it out.

There are plenty of lenses available and it takes any Nikkor lens, except the latest versions that don’t have a physical aperture ring. Ally still has her original FM2 camera which saw hundreds of rolls of film go through it on the cruise ships she worked on, as well as her very first few weddings before moving onto medium format and being very well travelled after that. I still have my original FM and a Nikon F3hp too.

The other Nikon that is very similar is the FE and FE2. These have an auto setting on them for aperture priority (you choose the aperture and the camera sets the shutter speed automatically). Unlike the FM range these cameras have electromagnetically controlled shutters that need batteries to operate. 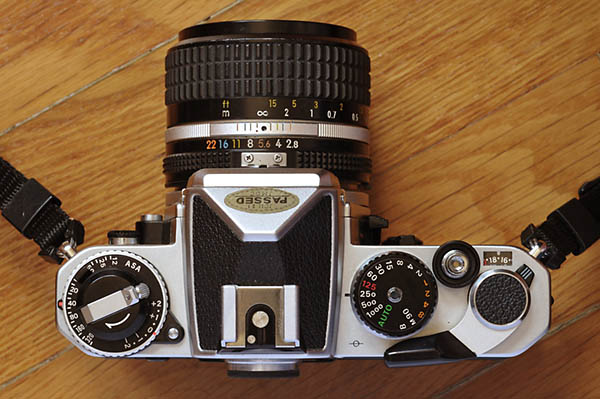 Image of FE by Edgar Bonet

When I was at college, this was the alternate camera to the Nikon FE . The AE-1 has an electromagnetically operated shutter and Shutter priority (you choose the aperture and the camera sets the shutter speed automatically). There was a second model called the AE-1 Program that had a full automatic mode (both aperture and shutter were controlled automatically). Obviously these cameras require batteries to operate.

These beautiful little cameras use the Canon FD range of lenses. Despite still going strong, they can be picked up for very little money.

The pro camera of this time was the Canon F1. A heavy duty camera that looked beautiful but weighed a ton. If you can find a good F1, they go for a lot of money, as most have had a hard professional life.

The Pentax is very similar to the Nikon FM in that it is totally mechanical and manual and only needs a battery for the light meter. This camera was manufactured from 1976 to 1997 so there are rather a lot of second hand ones around in very good condition. Pentax lenses, while being of a very high quality, don’t attract the premium prices of Nikon or Canon. Therefore, the camera will cost you less in the long run when more accessories and lenses are required.

Look out for a good condition model as there are plenty to choose from. 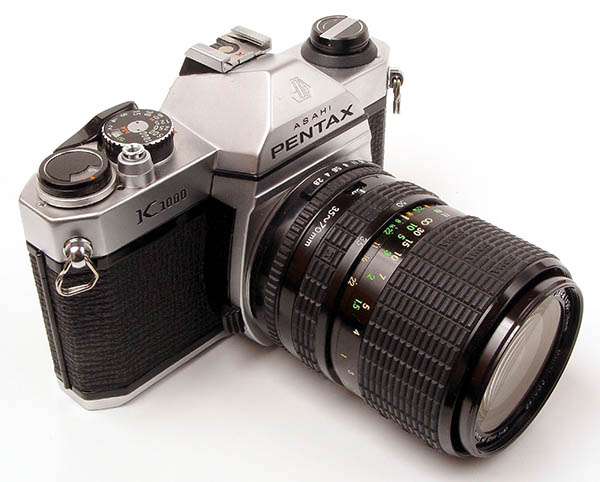 The Olympus OM1 has a beautiful and tiny body and was originally compared to the Leica for size and quality. The OM series runs from the OM1 (totally manual) through to the OM4 (all singing and dancing program modes) as well as a basic OM10.

The OM1 MD model is the same as the OM1 but has been modified to take a motor drive.

The Zuiko lenses are excellent quality and like the Pentax system don’t attract the premium prices.

A lot of people with smaller hands prefer the ergonomics of the Olympus system. 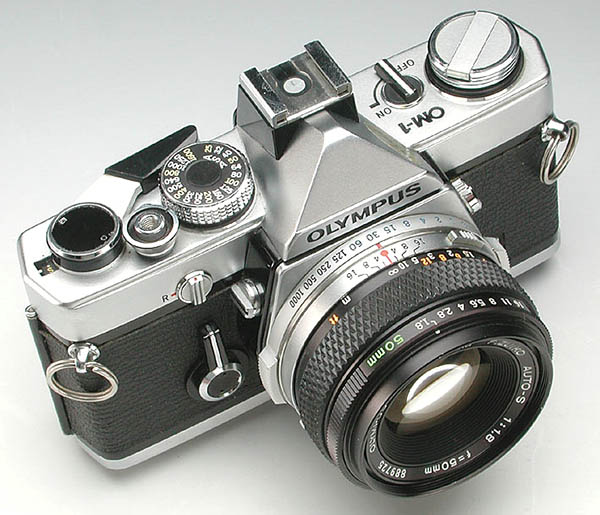 You’ve got your camera, found your way through the tricky film loading, taken some awesome images and figured out how to rewind the film so you can open the back. Now you are ready to get your images developed. The best and most satisfying way to go about this is to process Black and White film yourself. I will be doing a how-to blog post tutorial on this very soon. I can smell the chemicals already!

Of course when you first start out you might want to concentrate on getting your photography technique and exposure correct and let somebody else sort out the processing for you. Of course you might have created the photographs using colour film. Either way, you would need to send it to a lab.

Most photographic labs will offer a service of scanning your film after processing. That way you can then just work on your images digitally.

The above, best film cameras for beginners list, are only my suggestions. Therefore, I would advise you to try a few cameras out if possible at local camera stores. Different cameras feel differently in your hands because everybody’s hands are different. Go with the one that feels right to you.

Buy a system you can grow with. Check out the availability and cost of lenses and other extras like motor drives and flash fittings etc. Are they easy and inexpensive to come by?

Decide on your budget but remember your biggest outlay will be your long-term film and processing cost.

In the end it just boils down to enjoying your photography. This and using a tool that you can feel is working with and not against you.