26 Feb How to photograph steam trains

How to photograph steam trains to get great images

To paraphrase Mr Toad. “There is nothing quite so awesome as messing around in steam.” We love steam trains. Old, new, big, small – we don’t care. To be perfectly honest we don’t even know much about trains. We just know that these huge steam breathing, snarling and grunting creatures, that have a life of their own, make stunning photographs. In this article we’d like to share a few tips on how to photograph steam trains to get great images. (Of course we love all things steam – see our Steam, Smoke and Noise post.)

When we first started photographing steam trains we were rather disappointed with our results. The incredible steam beast that was so full of life on the track had been reduced to a dull, lifeless, public transport vehicle. We see the same issue in so many photographers’ images. We would like to show you how we tackled the problems, to create images that do these beautiful machines, and their keepers, justice.

What do you want your image to say about the train? For us it is showing the engine as a living entity, so we look for angles that are unusual but still show the train as living and breathing. We spend a lot of time with the engine at the station wandering around getting all sorts of angles. When we photograph moving trains we tend to scout the area for an interesting (sympathetic to the type of train) background first and then look for our position to photograph from. We tend to treat moving steam train images like a landscape photograph. If you can remove the train from the scene and still have a stunning shot then you’re onto a winner.

When thinking about how to photograph steam trains, one of the things we always advise, is to look for angles that not everyone else does. Go high, go low, go inside, put your camera under the train if it’s not moving and safe to do so. Just don’t be boring. 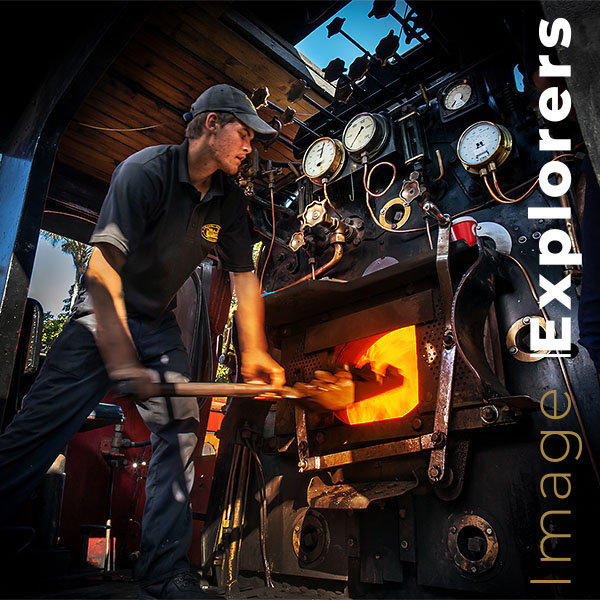 As the train is not moving for most of our images we try to show the movement by including steam as much as possible. While the train is waiting in the station we usually are able to create images with a small amount of steam; however the perfect steam comes just as the train starts to move. Clouds of steam and smoke billow out. This has 3 functions. Firstly it gives the train ‘life’. Secondly it hides distracting background details (cars in the carpark, hoarding board advertising etc) and lastly it gives the image a wonderful impressionist look with swirling clouds of white and the front of the engine emerging from it. You can also try panning to capture the movement. 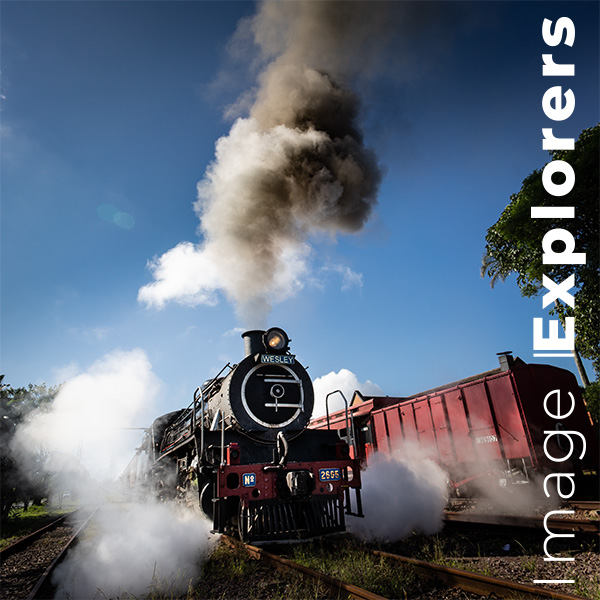 A steam train is filled with interesting details but don’t get so carried way that you forget your composition. Sometimes it can be helpful to look at the details through your camera but un-focus the camera so you just see the blurry shapes. This helps to concentrate your brain on the relationship between shapes and you will fin your composition improves. If you have an auto-focus lens you can usually switch to manual focus to do this. If you can’t then just focus on something far away and don’t touch the focus button until you’re ready to shoot. 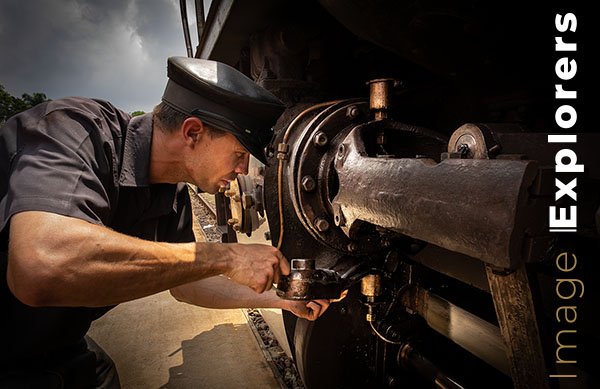 People who run steam trains are usually very proud of their engines, and rightly so as they put a lot of work into them. If you ask politely they are often willing to let you photograph areas of the train that the public don’t normally get to see. Remember not to get in the way and send them some images afterwards. 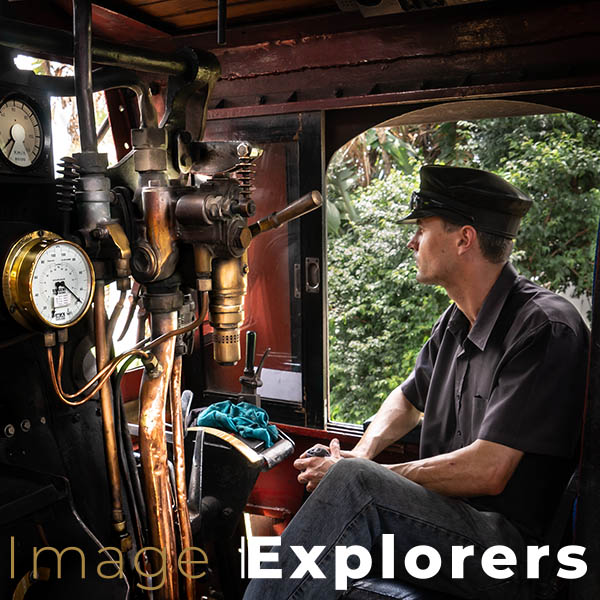 One of the issues with trains in bright sunny conditions is the high contrast in the scene. We tend to expose for the highlights most of the time as the shadow detail is easier to retrieve in developing in Lightroom or Photoshop Raw converters.

Leaving your camera set to auto is great if you are constantly switching from sun to shade and don’t have time to check the exposure as you could miss an important image. However if you do this be careful that the camera isn’t being fooled and over- or under-exposing. Ally always shoots on manual. I (Tim) occasionally shoot aperture priority but if I do I always keep an eye on my exposure and use the exposure compensation button if I need it.

Develop your images to create your vision

In the raw file converter:

All the above are done to movies. This is called Colour Grading. Different movies have different ‘looks’ to complement the scenes for example The Matrix series had a very green tinge. Some movies very contrasty or orange. Nothing is right or wrong.

Once you have created your ‘vision’ with the basic settings, save it as a preset so you can use it on the other images in that set. Most developing software, be it Photoshop Raw file converter, Affinity Photo, Lightroom or other has the ability to save and reuse Raw settings.

On an individual image basis go in and use the adjustment tools on the image to dodge, burn, increase or decrease contrast and vibrancy. Remember all the great photographers used dodge and burn techniques. From Ansel Adams’ landscapes through to Dorothea Lang’s migrant worker images.

When you are learning about how to photograph steam trains, filters can be a great help. If you are having trouble with the contrast between the sky and the dark of the train details, try adding a graduated ND filter.

To get rid of reflections and increase the saturation in vegetation try using a polarising filter.

As always the most important part of the whole process is to thoroughly enjoy your photography. 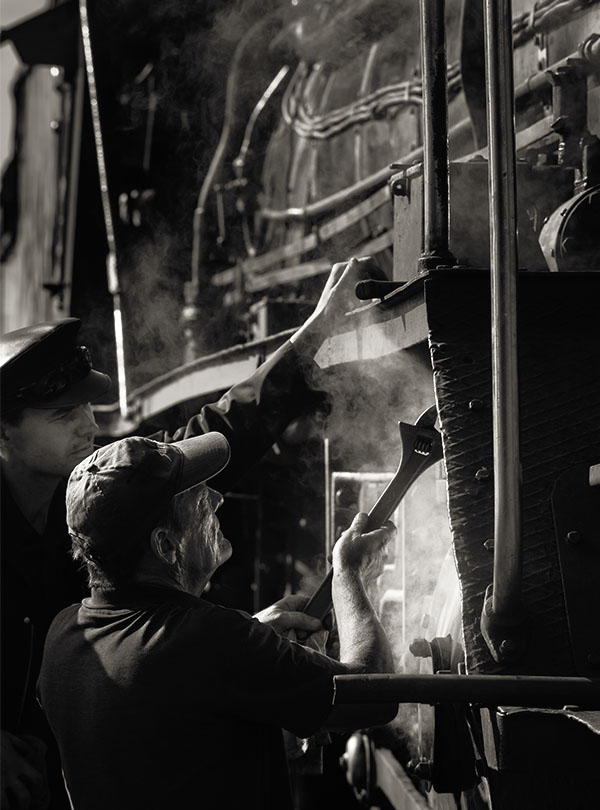 All of the images you see in this article were photographed in South Africa in KwaZulu-Natal at the Kloof railway station. The train that runs here is the Inchanga Choo Choo that is part of the Umgeni Steam Railway (USR). The USR is a volunteer run organisation dedicated to preserving these railways in South Africa. The Inchanga Choo Choo runs on the last Sunday of every month generally. It is a lovely ride from Kloof to Inchanga (a tiny village approx half an hour’s ride away). It has a craft market at Inchanga and people often take a picnic. It’s a perfect way to experience the atmosphere of a traditional steam locomotive. It is a favourite of young and old alike. Tickets sell out fast in advance!

Many thanks to the Inchanga staff, particularly to Andre the driver, for allowing us to photograph inside the engine cab. We apologise to both the fireman and engineer, in whose way we inadvertently got in. For an awesome photographic experience we cannot recommend this highly enough