Ever wanted to photograph a secret place in London?

Waterloo in London, is the busiest railway station in the United Kingdom with a quarter of a million people traveling through it every day. How do we find a secret place in London to photograph, in one of the most crowded cities and areas in Europe? I discovered this place by accident a few years ago while out exploring and have visited to take photographs again many times. Yesterday, Ally and I took our cameras to photograph a secret place in London where she had never been before. Let me tell you about it and how to find it.

What is this secret photographic place?

It’s a tunnel covered in graffiti!
“Really Tim? You expect me to read a post about a grubby road tunnel next to an overcrowded station?”……
Now before you stop reading let me explain a little more …

Banksy tunnel or to give it its correct name Leake Street Arches is an incredible photographic paradise.

It is nicknamed “Banksy tunnel” because the well known street artist called Banksy organised The Cans Festival there in 2008. He invited graffiti artists with stencils to paint their own pieces. 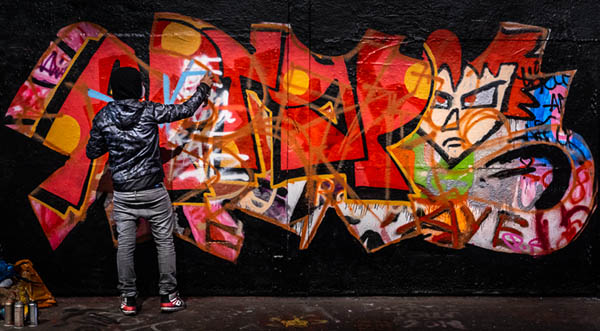 Street Artist hard at work in the Banksy Tunnel unaware of us taking photographs.

Banksy Tunnel is now a spiritual home to some of the best street artists in Europe and the best thing about it is, you can usually find some of them working on a huge piece there. Most of the artists work freehand rather than stencil so the scope for interesting images with artist doing big sweeping movements is immense.

The tunnel is just an amazing photography opportunity for people and textures as none of the artists object to being photographed while they work. 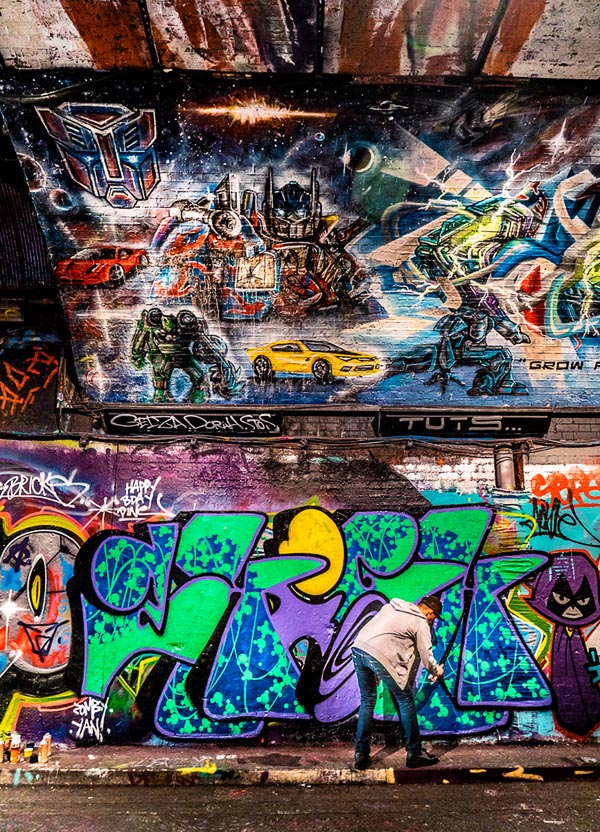 Another Street Artist creating a very large piece. The smell of aerosol spray paint can be overwhelming. We were surprised he wasn’t wearing a mask.

As this is quite a dark tunnel we put the ISO on the camera up to 1600. A bit grainy but I feel the grain adds to the secret London place feel of the image. It’s grungy, dirty and in your face so the grain seems to work really well. See our post on low-light photography. 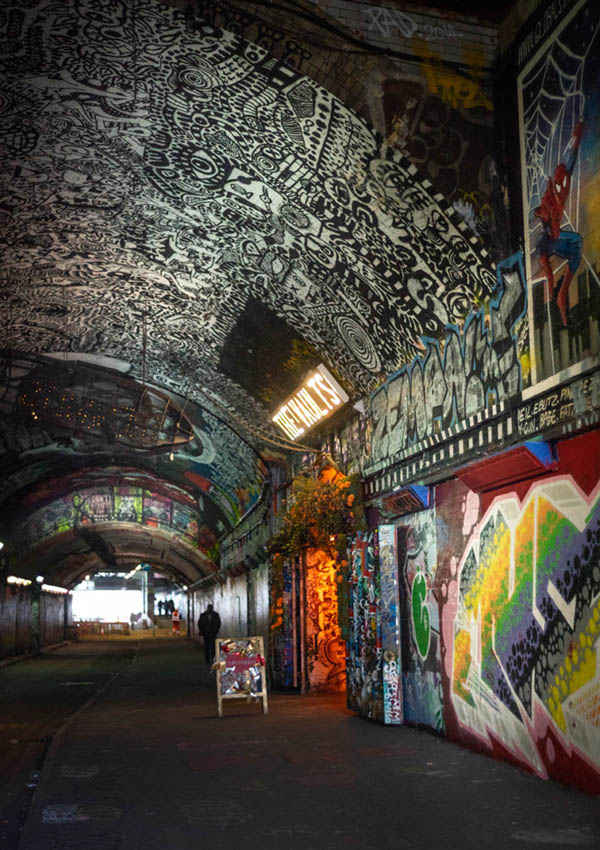 The Vaults, Leake Street, London where you can safely photograph a secret place

Absolutely. Despite what you might read in the press, London is very safe. Unless you go to totally deserted areas at unsociable hours you’re highly unlikely to have any problems. I have been photographing in and around London for the past 25 years and have never once had a problem. Be sensible, and like anywhere in the world don’t flaunt your equipment in dark deserted areas late at night when nobody is about and you’ll be fine.

A bonus not quite so secret place

When I was out exploring areas of London with our son Jethro (excellent Illustrator – see his illustrations here), he took me to this most awesome, quirky and cool little bar/café. It’s just outside the far tunnel exit and is called the Scooter Caffe. You might walk right past it without a second look. 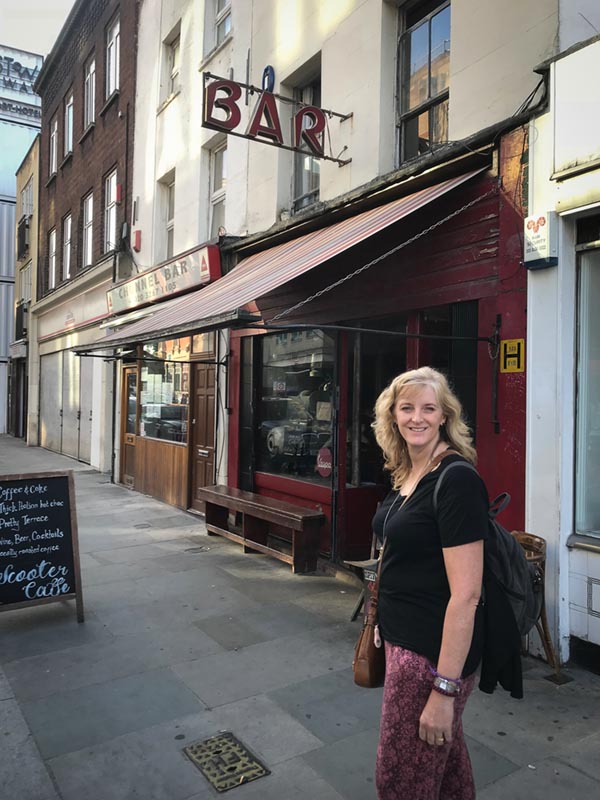 You could walk right by the Scooter Caffe London, Waterloo, and miss a phenomenal experience

Coffee with Jethro (left) and pan of  the interior of the Scooter Caffe, Waterloo, London

The theme of this beautiful grungy bar is old Vespa scooters and all the details that go with them: helmets, number plates and appropriate film posters. Go in and you’ll be rewarded with a unique experience.

The staff are so friendly and whether you have a quick coffee or spend a few chilled hours with several bottles of very good cider (yes I did both), you will be rewarded with some interesting details to photograph.

Lighting is a challenge as there is darkness with neon lights inside but daylight streams through both ends of the building.

Wander down the tiny spiral staircase for more interesting details to photograph. We had a similar issue when photographing Truth Coffee in Cape Town. 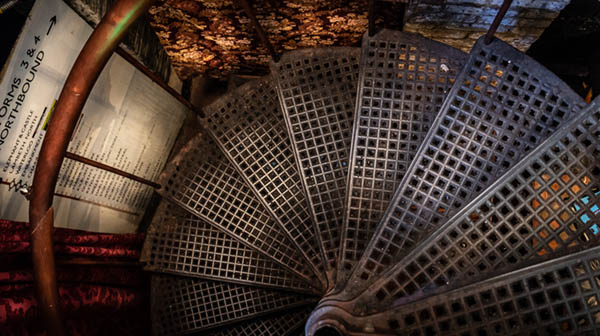 To quote from the We Are Waterloo website, “It featured in the third Bourne film, Johnny Depp has dropped in for a drink and Ethan Hawke is a regular when he’s in the area.”

Where to find these secret London photography places

When exiting Waterloo station (there are at least 4 main exits) you need to head around to the back of the station. The easiest way is to go out out the front, turn left and find York Road. A very short way down York Road (you’ll see the London Eye on your right) you’ll find Leake street. Turn left into it and after a short walk you’ll be there.

Once you’ve finished creating amazing images and wondering how some artists painted the ceiling, head out the opposite end of the tunnel and turn right into Lower Marsh Road and you’ll see the Scooter Caffe. 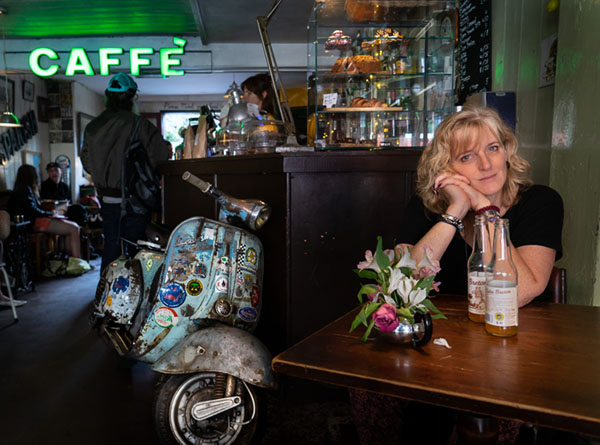 Two secrets for the price of one

If you are just passing through Waterloo station and have some time before you next train or your visiting the London Eye (five mins walk away) be sure to take a tour of the Banksy Tunnel, and once you’ve finished making images there, give your creative soul a treat and head over to the Scooter Caffe. You will not be disappointed.