Is there a really cool part of Cape Town?

No, because absolutely everything is very cool! Let’s start with at the place God designed purely for wave lovers … Muizenberg! Muizenberg sits in False Bay, so called because the early sailors used to often mistake it for what is now the Cape Town harbour area. It is a small bohemian seaside town that is spectacularly laid back.

Surfers and kite boarders flock to the beautiful beaches and one of our most enduring memories is sitting in a fish and chip shop on the front watching surfers vie for waves while the gentle ocean breeze took the edge off the heat. Lucky Fish & Chips is wonderful, absolutely fresh, and caters for gluten-free – yay! 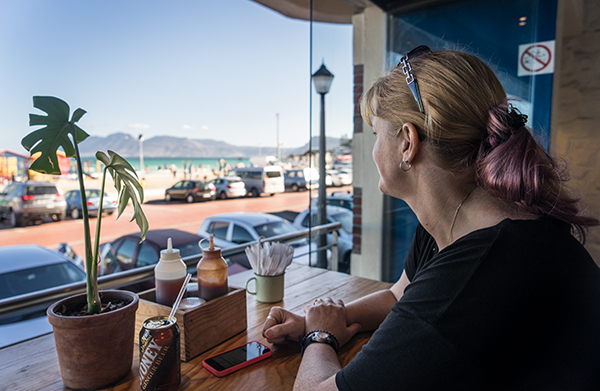 Right in the heart of Muizenberg is the area called Surfers’ Corner, dominated by surf shops, surf board hire shops, surf schools, or restaurants and cafes where you can sit and watch surfing! Further along the beach (out of sight of the real purpose of Muizenberg) you can find the swimming area and then further along from that is an area designated for kite-boarding and wind surfing.

When in Muizenberg the first-time visitor will be very surprised to see flags with pictures of sharks on. Due to the abundance of sharks, in particular Great Whites, Muizenberg beach has a shark warning system. This starts with a green flag for All Clear, black flag – spotting conditions poor, red flag – high shark alert and white flag – get out, get out!

Apparently, surfers paddling on a surf board, look exactly the same as a juicy seal to a hungry shark.

Apart from the flags, there is another way of telling of the presence of a shark – a bloody loud siren goes off, scaring the living daylights out of you, quite possibly more than a shark would. Because Muizenberg is overlooked by a mountain, there are shark spotters who sit at various points up the mountain with binoculars watching the bay for shark shapes and alert the beach when one comes too close to the surfers. At the siren, almost everybody gets out of the water and waits for the all clear flag to reappear before continuing where they left off. The all clear flag doesn’t actually mean there are no sharks. It just means that they are not near the surfing area.

Sharkspotters have an amazing free app for your phone that shows the ‘shark conditions’ around Muizenberg and surrounding bays. This organisation does an amazing job of protecting both humans and sharks and deserve a lot of support. 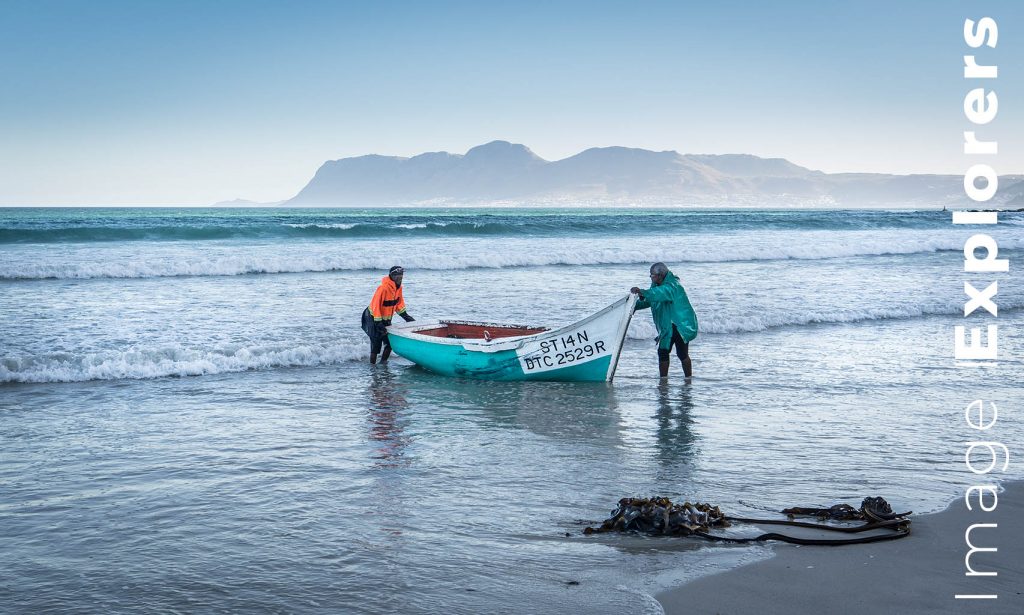 What many people don’t know about Surfers’ Corner is that the locals bring in their netted catch. On our first evening back in Muizenberg, a huge crowd gathered as the fishermen hauled in masses of yellow-tails. We grabbed our cameras and ran over as fast as possible as there were so many photo opportunities to be had. As it was dusk we were working at reasonably high ISOs and slower shutter speeds however as we were also photographing at the wider end of the lenses we could still hand hold ok. My rule of thumb is to never shoot slower than the focal length of the lens I’m using therefore at 24mm I wouldn’t hand hold slower than 1/25 th of a second – unless I’d had a strong Truth coffee of course!

There was a lot of excitement around the haul as some of the less salubrious members of the crowd tried to steal the fish. This is not terribly easy as the fish are almost two-thirds of a metre in length. One old fellow grabbed a fish and wandered back up the beach past us, muttering “This one’s mine”. It didn’t take long for him to be spotted, and he was promptly chased by about 5 men, he was stopped in the car park and relieved of his ill-gotten “fish”. 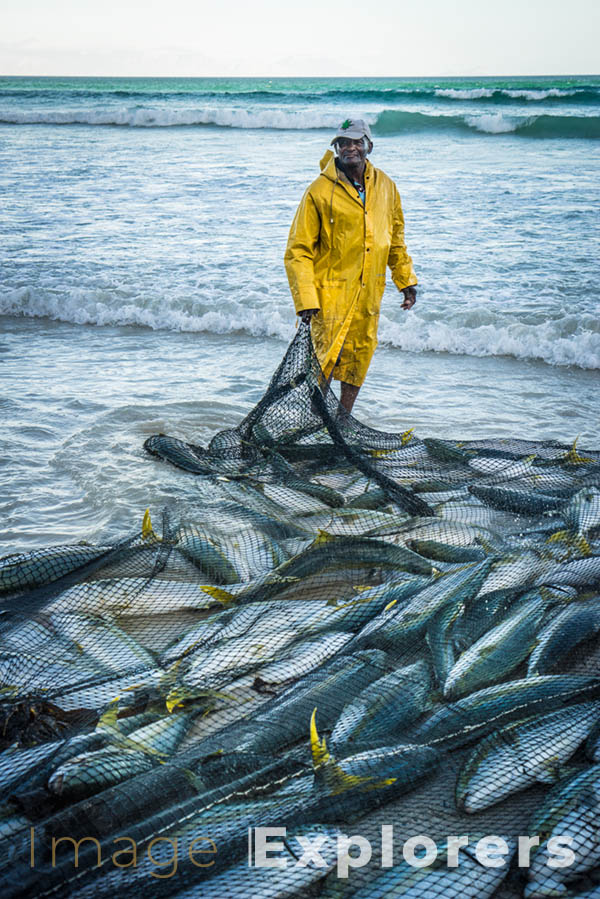 Such amazing photo opportunities even with the crowds 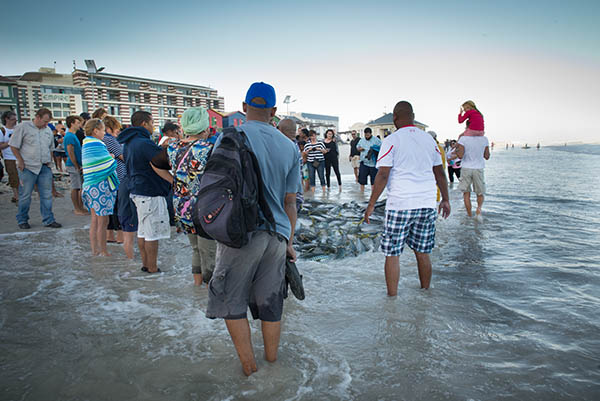 Crowd with haul of fish on Muizenberg Beach

Not a paradise to all

Muizenberg however, is not paradise on earth for everybody. There is a lot of poverty and some locals have to sleep rough. They do so mainly outside the government offices where they feel safest. A lot of people also sleep on the mountainside in sheltered areas or caves.

Muizenberg has many neighbours ranging from the super wealthy Constantia wine producing area to the north, to the large more deprived Mitchell’s Plain area on the east.  The township (Mitchell’s Plain) is home to many victims of forced removal, due to the implementation of the Group Areas Act dating back to apartheid days and has quite a big gang and drug problem. The road in and out of Muizenberg (Prince George’s Drive) is often used for street racing as well as the heart of taxi wars where burning tyres can litter the road. The police take care of this very quickly and warn the residents living nearby not to venture out for a while.

Having said all that, Muizenberg is just the most chilled area dominated by old hippies, younger surfers and hipsters with people of all colours and languages to be seen.

We spent a very enjoyable evening watching talented kite-surfers tearing up and down the surf, whilst performing the occasional trick and jump as the sun was setting. Some of the kite-surfers noticed us photographing them and performed beautifully for us with the mountains and the setting sun as a perfect backdrop. We met some of them afterwards. Claire, a spectacular kite-surfer, turned out to be a French business student who’d been there for 2 months, doing an internship at the local surf shop working in the morning and kite-surfing in the afternoons.

Just inland from from Surfers’ Corner is the 200ha Greater Zandvlei Estuary Nature Reserve. It is a wetland, river system and estuary lake. On the one side of Zandvlei is the beautiful Marina da Gama housing estate. A lot of the houses back right onto the water so that the residents can visit one another by wind-surfer or kayak! Our friend Suzi lives here, who having been in the UK for 16 years had just returned to S Africa. Having been anglicised for all those years, she needed to be refreshed in the art of braaing. (South African for barbeque.) We thought our visit would aid that need. 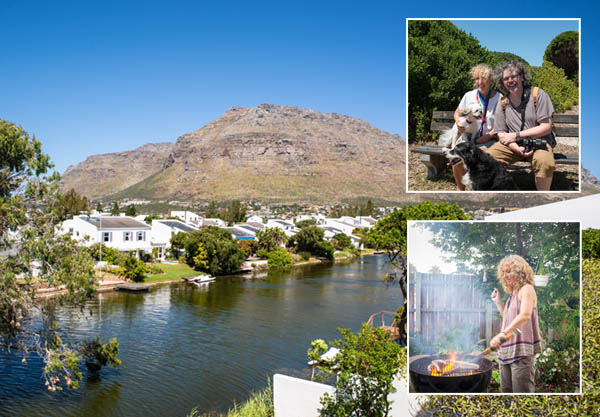 There are so many amazing surfing areas around South Africa. We also spent a lot of time in Durban waters and they are very different experiences but both amazing. Durban waters are much warmer but for a total seaside chilled experience, you need to visit Muizenberg. It doesn’t matter if you are a surfer or even like waves. It is an experience not to be missed and shows a different side to the Mother City. If you’re in Cape Town and want to see a different view of Table Mountain, check out our Table Mountain sunset post and a trip to Robben Island is a must.