So often when we photograph places of interest, we look solely at the aesthetics of the scene. How does the light make it feel? What interesting shapes appear in the final image to draw the eye in? Which details shall I leave out to create a stronger composition? These are usually the things going through a photographer’s head. Occasionally though, there is a subject that is so much more powerful and important than our everlasting search for spectacular and beautiful images. Nelson Mandela’s cell on Robben Island was just such a place. 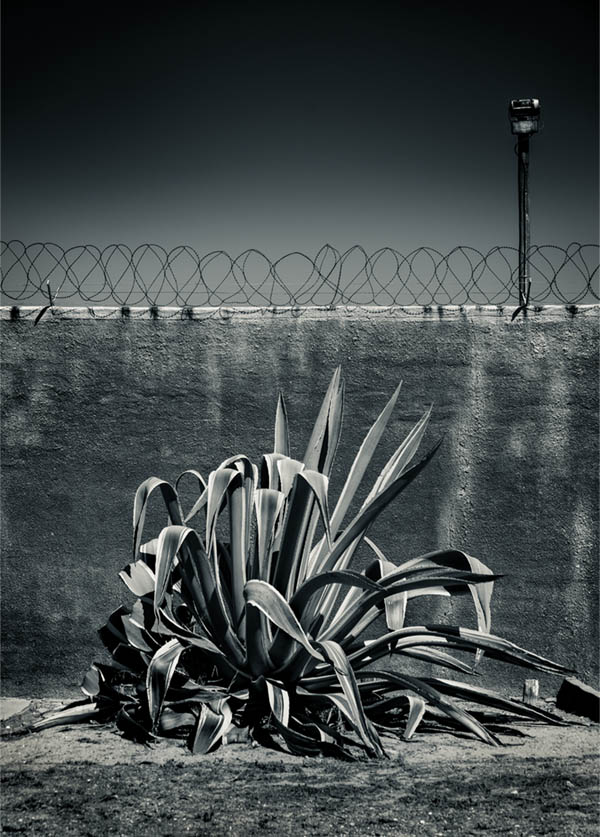 Nobody really spoke of apartheid issues at our (all white) school. Apartheid was deemed a good thing by most white adults as it meant prosperity for the few, cheap labour, and it kept people, who were made out to be ‘slightly less human than us’, at bay. It was only in my last years of schooling and starting college that I started to question the evil status quo.

I started hanging around with friends who were anti-apartheid and questioning the government’s policy and lack of human rights if you weren’t white.  During this time, I met a number of people who had been targeted by the apartheid government security police (BOSS – Bureau of State Security, later NIS). Some of them had been tortured, whilst some had lost loved ones who had been killed by the state. One friend had a bomb go off in her office and it killed a fellow worker. The parcel bomb was believed to have been sent by the government security services. Another friend’s boyfriend was murdered by the army when he fled to a neighbouring country. These friends were white but supported anti-apartheid organisations. It was even worse if you were black. I heard many accounts of pain and death at the hands of the state. This turned me into a highly cynical individual when it comes to government and corporate behaviour, as Ally will testify to.

When I was called up to go into the South African army (all white male South Africans had to do 2 years in the army then) I had to make some choices. The army at that time had two main roles. To fight the ANC, who are now the government, and to keep black people in subservience with a strong military presence in the townships. (Townships were black only towns with few amenities and situated far away from the affluent white areas. Apartheid is an Afrikaans word meaning apartness. Whites lived in white areas, Black people in black zoned areas etc. Different races each had their own area. This was the law and severe punishments were metered out for breaking it.)

I could not agree with any of those horrific policies so just before I was due to report for duty I hatched an exit plan. I wrote a letter to the army intake officer telling him that I was out of the country and was unable to get back to report for duty. Explaining that that I would let them know as soon as I returned, I posted the letter to a friend in London who then sent it on to the army so it arrived back in SA with a UK stamp. This bought me time. By time I mean a number of harrowing months of worrying that I would be arrested. I finally managed to leave the country almost 6 months later.

Why couldn’t I just be a political objector?

The price for political objection was 6 years prison and as I was only in my mid-twenties I didn’t consider that as a viable option. This is always something that has always left me feeling guilty, as I was fortunate enough to leave, while millions of South Africans had to stay and endure.

Before anybody thinks that I am just anti-authority (well… maybe I am a bit) I must point out that I was in the London Metropolitan Police (Scotland Yard) as a forensic specialist photographer for 7 years.

It is through this lens that I viewed Robben Island, the maximum-security prison island for political prisoners.

It was a beautiful Cape Town summer’s day, but Ally and my hopes to visit Robben Island had been dashed the night before. It turns out that you have to book weeks or sometimes months in advance. We decided to go down to the booking office in case there were any cancellations. As we arrived one of the booking staff had just got a few cancelled tickets so we were on our way.

A half an hour boat trip across the sea with spectacular views of Table Mountain in the background does not prepare one for the heart-breaking yet inspiring visit to come.

Prisoners were forced to dig rocks in this quarry. The cave is where they sheltered from the harsh sun during breaks

Arrival and the bus trip

Whilst you are not allowed to wander around by yourself you do get a very knowledgeable guide on the bus tour. Very often this is a former prisoner from the island. On the tour you visit the quarry where the prisoners broke rocks, see the light house and staff village and find out interesting facts like that Robben Island was once a leper colony amongst other things.

Here is also where there is now a significant pile of rocks. This was started by Nelson Mandela, who after being elected President, attended a reunion on Robben Island. He walked off to the side dropped a rock onto the ground. He was followed by many of the former prisoners who added their own rock to the pile. This formed a rock memorial to their time on the island.

It is because of the bright sun off the rocks, the alkalinity of rocks and constant exposure that Nelson Mandela’s tear ducts were damaged. Press photographers were asked not to use flash when taking photographs of him.

Once into the maximum security cell area we had a new guide who was once an inmate with Nelson Mandela. 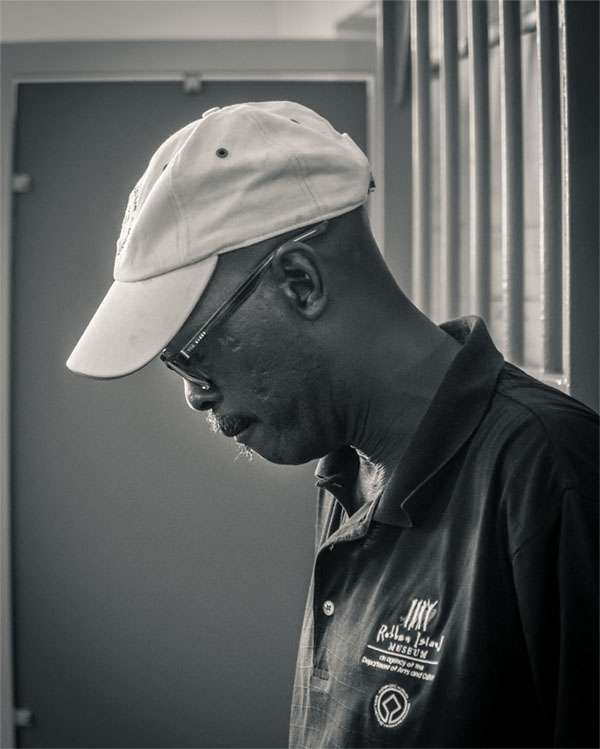 From a purely photographic point of view, the maximum security wing, with its grey cells, barbed wire and sparse vegetation is nothing to write home about. Then you hear the stories about how Africa National Congress activist Nelson Mandela with help from Ahmed Kathrada and Walter Sisulu wrote the book ‘Long walk to freedom’ under the noses of the guards and hid pages in the garden in tins, the whole place comes alive. Stories from somebody who was there, about how they hid secret messages in a tennis ball and threw it over the wall ‘by mistake’ so they could communicate with other inmates, just leave you in awe of these men who were beaten but not broken. What impressed me most about these heroic individuals was their overriding hope in even the darkest times of their lives.

Whilst the tiny cell no 5 that was Nelson Mandela’s (Madiba’s) home for so long initially leaves an impression of sadness. That a man can be caged for such a large part of his life because he fought for human rights is no small thing.  This feeling however soon evaporates. It is replaced by the incredible hope that if a man imprisoned and mis-treated for 27 years can forgive his captors, and then become one of the worlds greatest leaders and Nobel Peace Prize winner, then anything is possible. 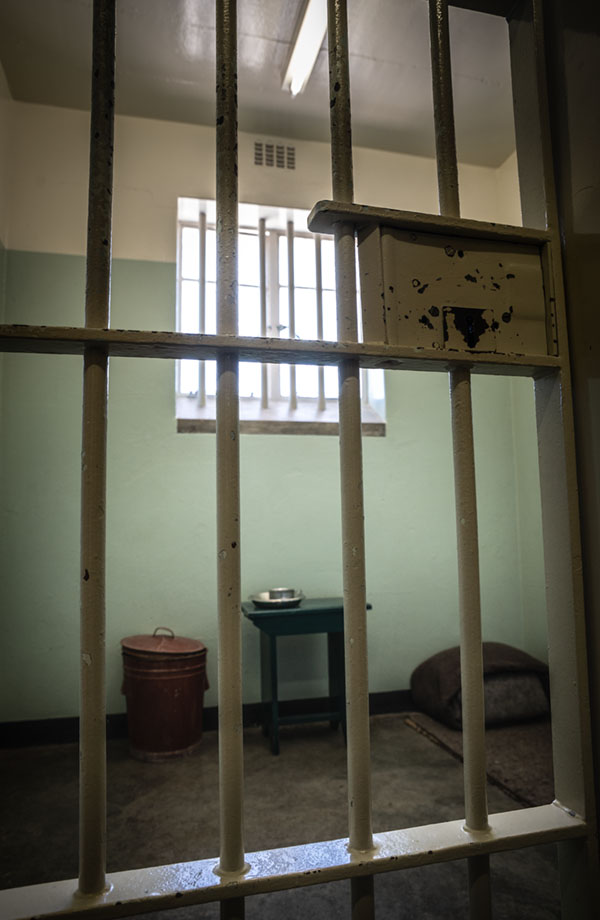 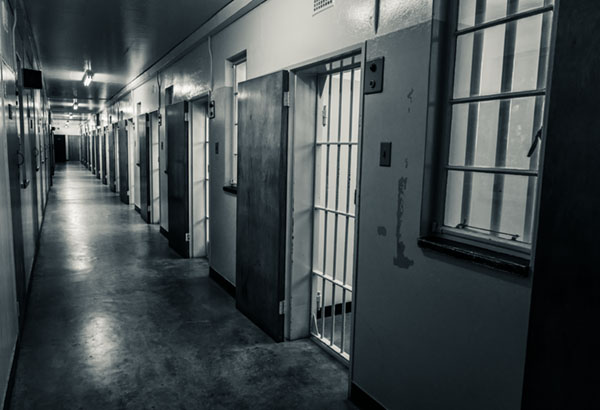 I would have loved to go into the cell to photograph from Nelson’s point of view but unfortunately the cells are locked. So, I had to hang back until the crowd had gone,  then photograph the corridor to try to show the loneliness of it all. 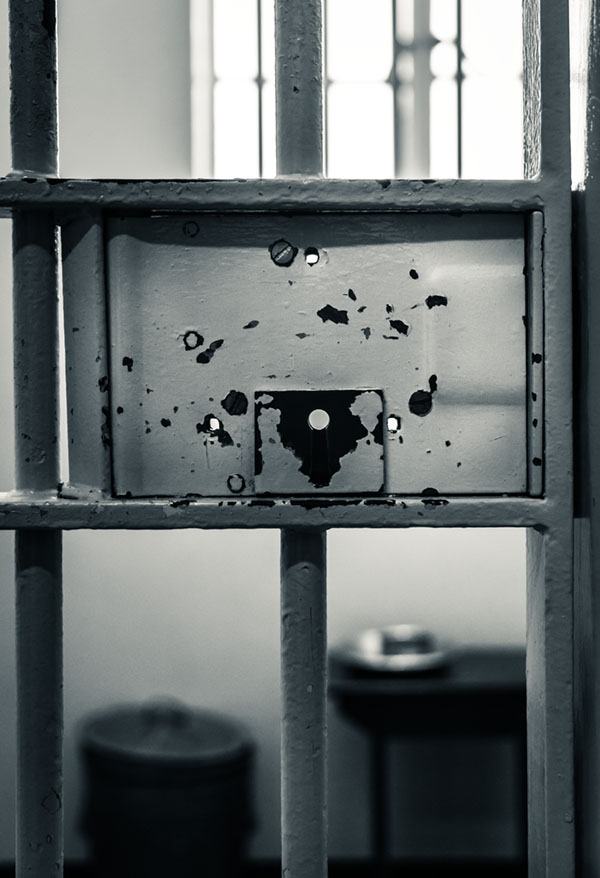 Nelson Mandela’s cell and lock with plate and toilet bucket

The prison yard and garden

Outside Nelson Mandela’s cell in the prison yard are a few bushes that seem to survive in waterless environments. This area is where, later in his incarceration, Nelson tended the garden and hid the manuscript pages for his book. I often try to hang back during any guided tour to get images of the place without tourists. This didn’t work this time so I had to settle for the close up view rather than the large expanse of the yard I was hoping for.

The bright light against the walls, calls for creative exposure. You can’t rely on your camera’s internal light meter for this. 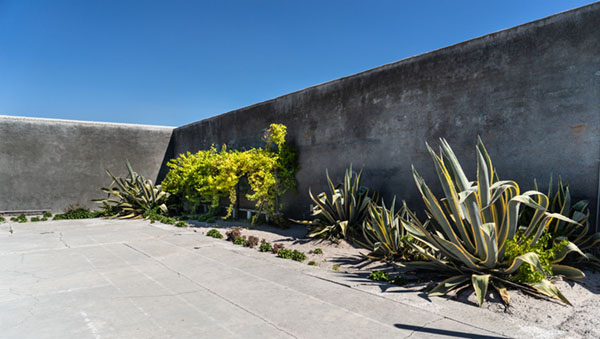 Why Black and White?

I have converted many of the images from Robben Island and Nelson Mandela’s cell into Black and White. I feel that the lack of colour helps to reflect the stark and colourless living conditions these South African heroes endured. The high contrast also reflects the intense brightness of the sun beating down onto that little island. Although we photographed with digital cameras we would really like to return with film cameras, with black and white film. See here if you want to see how to convert colour to black and white.

Photograph from the soul

This trip was a very different and special one for me. I am usually very excited about shapes and contrast and textures, but during our visit to Robben Island and Nelson Mandela’s cell my creative photography took a back seat.

Most of the time I photograph subjects from the creative part of my brain. There comes a time occasionally however, when I’m so overwhelmed by the subject. Here, the only thing to do is to look at the scene in wonder, and hope that my photographic auto-pilot will take care of the technical side. This is so my soul can do justice to the final image. Robben Island and Nelson Mandela’s cell was that place for me. 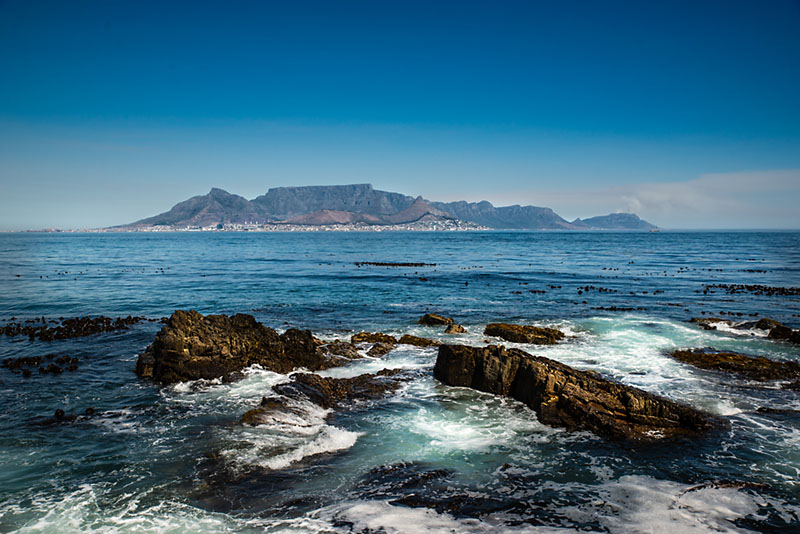 Whilst you’re in Cape Town, don’t forget to take a trip up Table Mountain and the best coffee shop in the world, Truth Coffee.