How to Photograph Reflections

So, you’re out with your camera and you come across a really interesting landscape or scene. It looks good from every angle, but it’s not awesome. We’ve all been there and struggled with making an eye-catching image from a great, but not amazing, subject. How do we deal with this? Photograph reflections!

It seems like such a simple answer but adding a reflection to your image will lift it and give a depth that it didn’t have before. A beautiful reflection can add a sense of symmetry to your image, that can very often improve your composition. We’d like to give you some of our top tips on how to photograph reflections and where to find them.

Ponds, lakes, and very still rivers. These are the usual tools to create interesting reflections, but they’re not the only source of photographic reflective goodness. Anything with a shiny surface can be used for beautiful symmetry and reflections.

It was a beautiful, blue sky but cold Autumn morning when we headed down towards the river from our house. With camera and tripod in hand with our trusty ND filter in the bag. We had hoped for a bank of mist hovering over the river as it sometimes does on the cold clear morning and were hoping to do some long exposures to capture the movement of the river in a misty form to complement the hovering mist. Unfortunately, when we got there, most of the mist had lifted and the river was very still.

Best laid plans etc … must get up earlier!

We decided to make the best of the situation and used the reflectivity of the still river to create images that gave the boats a symmetrical floating feel. We put the camera on the tripod and experimented with various exposures (including some 30 second exposures using the neutral density filter). 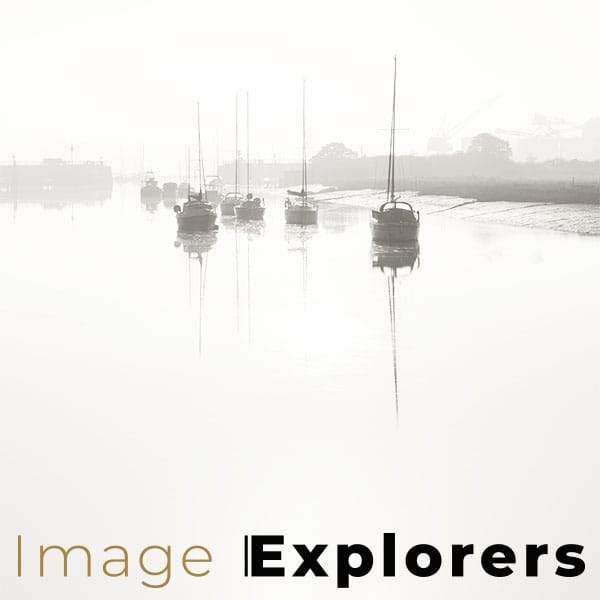 Symmetrical boats on the River Colne – 2.5 second exposure with an ND filter

Even though it wasn’t what we’d initially planned, Tim’s inner minimalist was overjoyed with the simplicity and symmetry of the final image. This one was converted to a black and white tone as we felt it worked really well. See our tips and geeky explanations for converting colour to black and white.

Not the Obvious – Shiny, Happy Surfaces!

Not all reflective images need to be from water. When we were photographing St Peter’s Basilica in the Vatican City, Rome, we used the shininess of the cobbled street to photograph reflections of the lights which brought the foreground to life and also helped to lead the eye in to the main architectural details. We find that wet streets, after a short downpour can give beautiful results. 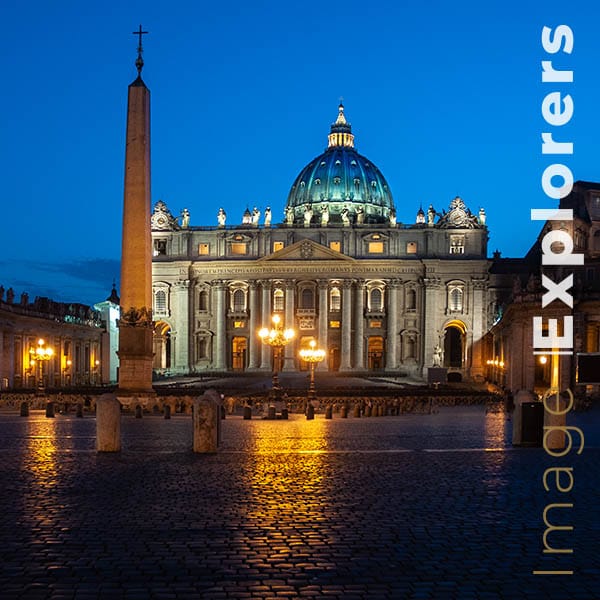 Life in a Puddle

Not every reflection requires a large pool of water. Keep an eye out for even the smallest puddle which will work if you photograph from a low enough vantage point. Our initial image of St Mark’s Square, Venice, would have been quite acceptable. However, towards evening the water starts to seep up from the canal creating small puddles in the square. We crouched down, much to the amusement of our fellow tourists, who thought we were trying to photograph the puddle itself, and used the puddle as a reflective surface during few second exposure. As we didn’t have a tripod with us, this exposure was hand-held by balancing the corner of the camera on the ground for stability. 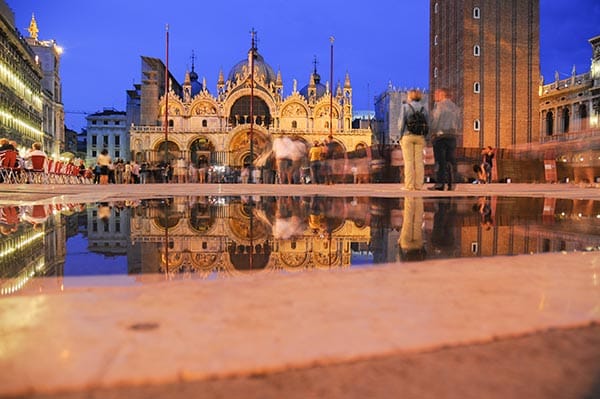 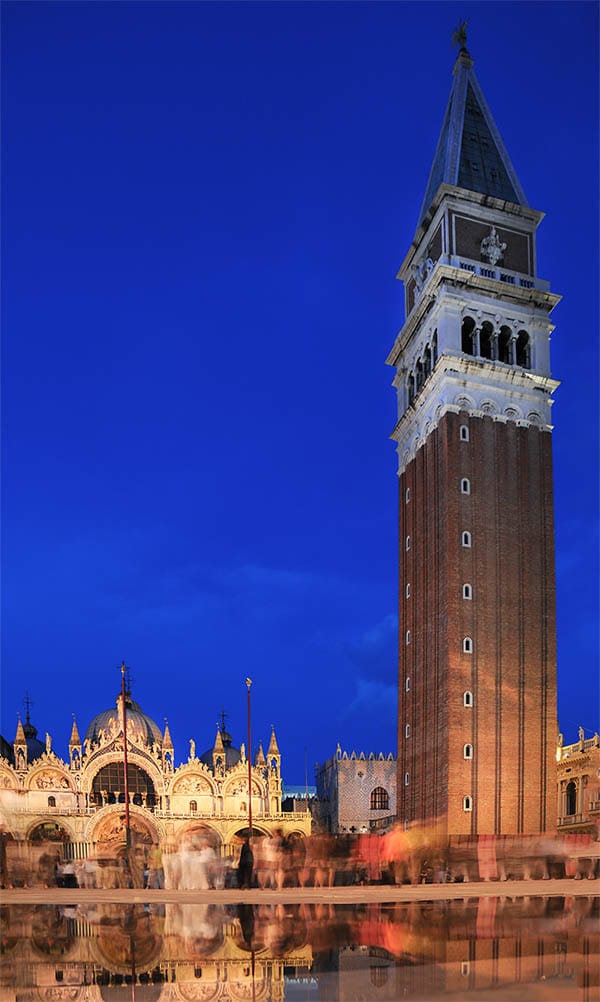 After an interesting day where Tim managed to get chased by a baboon that had stolen our fiery hot cinnamon chewing gum out of the car, we managed to capture the sunset dropping down behind Champagne Castle (the mountain) South Africa. As beautiful as it was, it still didn’t have that special something, until we found a small pond and used the reflection to create a symmetrical mountain landscape. 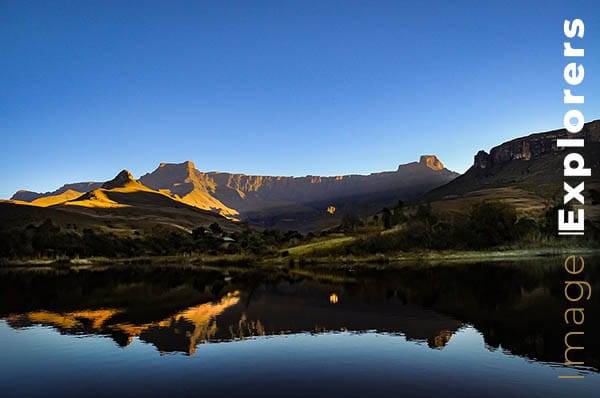 Beautiful symmetry using the lake in the foreground

During our trip up the Eiffel Tower, Paris, France, we were on the lookout for something a little bit different to the usual aerial views over Paris. Tim spotted the spyglass reflections and immediately honed in on the glow of the orange sunset reflected in the metal contrasting beautifully against the dark blue of the Paris skyline. 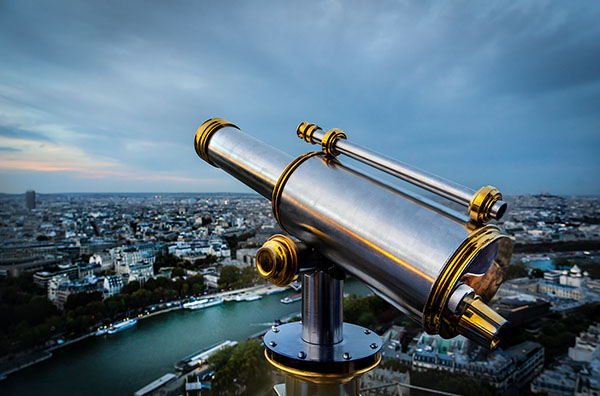 Reflective Symmetry to Mess with the Mind

Photographing reflections can lead to really interesting images. Look at the image below to see what we mean. 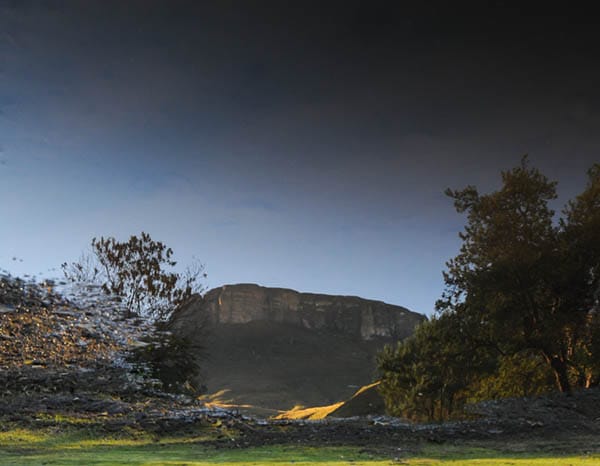 Now scroll down to see how the scene actually looked. 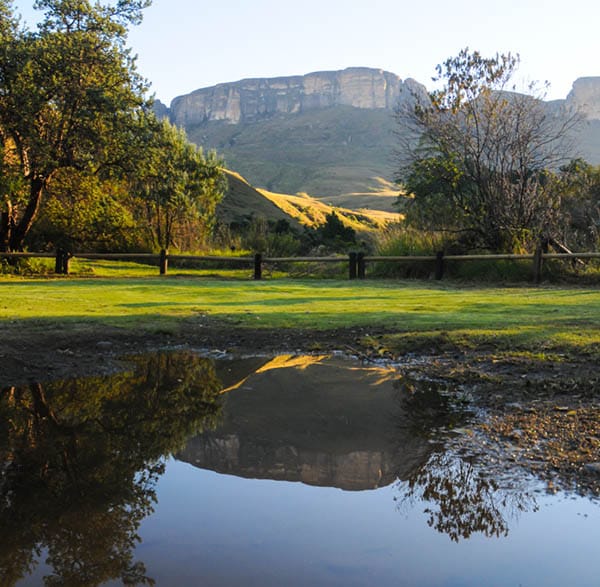 Makes your head hurt, doesn’t it? Flipping photographic reflections upside down can create some really interesting, mind-bending images. Have a look at the master photographer, Andre Kertesz’s, classic images for many more examples.

You can capture movement during your long neutral-density filter exposure but don’t forget you can also use it to display stunning reflective colours without the reflected detail. This 20 second exposure removes all the reflections of the mountain but keeps the orange sunset. 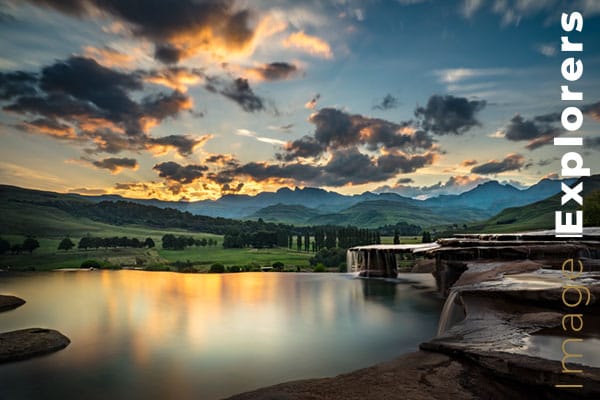 See here for our tips on buying and using an ND filter. If your sky is a little on the light side, see how to retrieve using Camera Raw.

Go Forth and Reflect!

To bear in mind: a reflection can be fleeting, depending on the source of the reflection. A rain shower can cause a puddle that will disappear; moving water will give a completely different feel to glassy, still water; cobbled streets can give a textured matt feeling or a shiny reflective image, depending on the wetness or dampness of the street.

Next time you are out looking at land or cityscapes, keep an eye out for any surface that can be used for a photographic reflection. Try something a bit different – change your angles, change your viewing position, climb up high and go down low … experiment and have some fun!